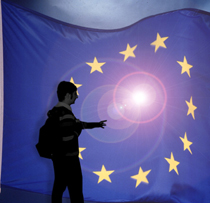 High-skilled labour flows: what EU migration policy do we want?

The European Centre for migration policies organises a round table on high-skilled labour flow, on 18 April 2007 in Brussels.
The round table aims to contribute to the debate on the forthcoming EU directive on the conditions of entry and residence of highly-skilled workers.
Two main issues will be addressed: the perspectives of mobility within the EU Member States for highly skilled migrant workers, and the "brain drain" affecting their home countries.
Speakers will include:
Practical information:
Date and times: 18 April 2007, 15:00 to 18:00
Venue: European Parliament (rue Wierz, 1047 Bruxelles), room A5G3
Languages: English, French, Italian, Spanish
The draft agenda of the "High-skilled labour flows" conference
The registration form for the "High-skilled labour flows" conference
The European Center for Migration policies was created in the framework of the City to city project, itself funded by Interreg IIIC South. City to city focuses on the integration of migrant workers within the communities in which they live and work. It brings together 11 local and regional authorities.
The Council of European Municipalities (CEMR) co-organises the round table.