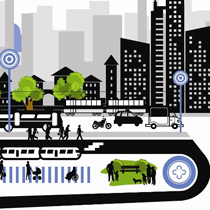 Green paper on urban mobility: the Commission seeks your opinion (until 15 March 2008)

European local and regional governments are invited to participate in a consultation on urban mobility, following the European Commission's adoption of the Green Paper on urban transport, on 25 September 2007.
The Green Paper, which takes into account the responses of two previous public consultations, aims to identify obstacles to successful urban mobility and to find possible solutions. The documents identifies 5 political priorities:
The Council of European Municipalities and Regions (CEMR) welcomes the Commission's subsidiarity approach, which emphasizes the shared responsibility of all levels concerned and encourages a collective effort of local, regional, national and European level. The role of the European Union, as suggested by the Green Paper, is to support the local, regional and national policies and add value. The European Union must play a facilitating role, but without imposing top-down solutions which may not necessarily be appropriate for the diverse local situations.
CEMR's President, Mayor and Governor of Vienna, Michael Häupl, supports the statement of the Green Paper that usually, local authorities themselves rather than the EU are in the lead in defining and implementing urban mobility policies. But the EU can support them.
CEMR had responded to the first consultation phase end of April and welcomes the fact that its main points and recommendations are reflected in the options of the Green Paper. In addition to the above-mentioned points:
European local and regional governments may respond to the Green Paper until 15 March 2008. Based on the outcome of the consultation, the Commission will propose an action plan on urban mobility in early autumn of 2008.
CEMR will hold a political debate at its policy committee meeting on 4 December 2007 in Stuttgart, to which transport Commissioner Jacques Barrot has been invited.
Useful links
CEMR position paper on the first consultation
The Green Paper on urban mobility: "Towards a new culture for urban mobility"