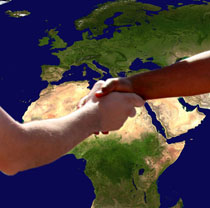 The European programme "Non state actors and local authorities in development" marks a first recognition of the role of local and regional authorities in development cooperation. This is one of the conclusions of the seminar organised by the Council of European Municipalities and Regions (CEMR), together with the National Association of Portuguese Municipalities (ANMP), in Lisbon, on 7 November 2007.
Local governments welcomed the European Commission's setting up of the community programme*. However, they called on the European Commission to guarantee the involvement of the local level in the action plan for the implementation of the programme.
CEMR's seminar was organised ahead of the EU/Africa Summit to take place in Lisbon, in December 2007. CEMR and its world organisation, United Cities and Local Governments (UCLG), will speak on behalf of local and regional government. They will endeavour to highlight the role played by local government and their associations in overseas cooperation policies.
The European Development Days (EDD)
The seminar also took place alongside the European Commission's Development Days, in Lisbon, from 7 to 9 November 2007. This year, the EDD particularly focused on the impact of climate change on development cooperation and the need for partnership between all actors involved. Jeremy Smith, CEMR Secretary General, chaired a session on "Local Authorities, Development and Climate Change"**.
Background information
In 2007, the Commission launched a new thematic programme* called "Non-state actors and local authorities in development". It replaced the -NGO co-financing' and -Decentralised co-operation' programmes.
The new programme's overall objective is to help reduce poverty in the context of sustainable development, including the pursuit of the UN's Millennium Development Goals (MDGs).
The conclusions of the seminar organised by CEMR and ANMP