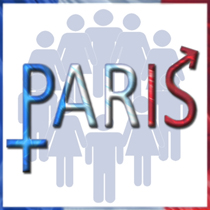 The City of Paris has joined the fast-growing list of European cities, regions and local governments who have now formally pledged themselves to take practical action to tackle gender inequality.
On Tuesday 18th December, the Council.voted to sign up to the European Charter for Equality of Women and Men in Local Life, which has been elaborated and promoted by the Council of European Municipalities and Regions (CEMR). The Charter contains a wide range of commitments to promote equality, across the range of its services and responsibilities. The city has developed an equal oppotunities action plan for its 45,000 civil servants, women and men.
Paris now joins other major European and French cities such as Vienna, Athens, Bilbao, Nantes, Rennes or Florence, and over 500 other local governments who have so.
The report to the Council in relation to Tuesday's vote says that Paris has already traveled half way along the path to equality in fields such as education and violence against women, but points out that there is still a need for progress in other fields of action, and in urban planning and economic development, for example.
CEMR's citizenship officer, Sandra Ceciarini, said 'We are really delighted that the city of Paris has taken this important step. Interest in our Charter is growing rapidly, with more towns and regions signing up, and we are confident that it will play a great role in getting gender equality higher up the local political agenda."
The Charter, launched at CEMR's general assembly, in Innsbruck on 12 May 2006, has now been translated into 17 languages. The follow-up to the Charter will be discussed at a major conference on 20 and 21 February 2008, in Pisa (Italy).
CEMR received financial assistance from the European Commission (DG Employment and Social Affairs) for the development and drafting of the Charter.
CEMR's charter in 17 languages
List of signatories of CEMR's charter
CEMR's conference "Acting locally for equality"
The website of the City of Paris (in French)