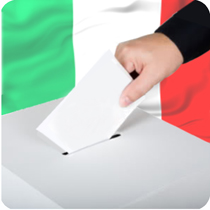 Results of the regional elections

The Italian right wing coalition won six out of the thirteen regions taking part in the regional elections on 28 and 29 March.

'Il Partito Democratico", the democratic centre left, obtained similar results to those obtained at the 2009 European elections with a total of 26% of national votes. Despite having maintained control over a majority of seven regions, the democratic party lost Piedmont headed by current Committee of the Region's President Mercedes Bresso, Latium, Campania, and Calabria.

The 'Lega Nord", League of the North allied to the PDL, won both Venetia and Piedmont for the first time in its history all the while maintaining control over Lombardy. The regionalist party received 12.7% of national ballots, winning an extra point in comparison to the last European elections.

The participation rate was of 63.6%, an eight point decline in comparison to the 2005 Italian regional elections.