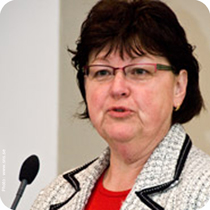 'Cohesion Policy must be decentralised and the partnership principle respected," as stated by Carola Gunnarsson, CEMR working group on cohesion rapporteur, at the occasion of a European Parliament mini-hearing on 26 April in Brussels.

The principle of partnership, whereby local and regional authorities are involved in the shaping and deployment of policies on the ground, was one of several CEMR recommendations to be taken into account in the EP Regional Development (REGI) Committee's draft report on governance and regional policy.

During her speech, Gunarsson underlined the need to simplify the procedure rules allowing access to EU funds so as to prevent potential beneficiaries from getting discouraged. Calin Chira, Chair of the CEMR Working group on cohesion and territorial policies, further stresses that 'EU policies should focus on beneficiaries rather than on methods and procedures."

'Local authorities, and especially local and regional associations, should be more involved in building capacities locally," as they are the best placed to do so, stated CEMR Executive President and MEP, Oldrich Vlasak. He also called on the European Commission to 'provide a clearer definition of the partnership principle and to define the methods it intends to use in the implementation of the simplification measures."

Gunarsson's intervention was well received by REGI Committee President, Danuta Hübner, who emphasised the 'need to strike a balance" between control and efficiency. The Committee President also asked that the Commission pronounce itself on the subject of contracts, an approach CEMR is very much in favour of. She asked whether this measure can truly be implemented and, if so, how the Commission intends to do so at the local level.

The report was presented by Romana Manescu, the Parliament draft report rapporteur and will be put to vote in the Committee in June 2010.
CEMR's political messages on the future of EU Cohesion Policy