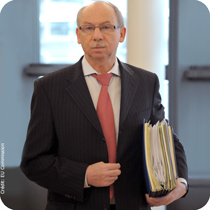 The European Commission has adopted a number of changes meant to reduce administrative burdens and save costs for EU beneficiaries, in the hopes of modernising the financial procedures and facilitating the use of and access to EU funds. These changes, adopted on 28 May by the Commission, should help deliver current programmes as well as the new generation of EU programmes post-2013.

'My main goal is for EU funding to stimulate innovation and growth by making it more accessible to European businesses, SMEs, researchers and other beneficiaries [such as local and regional governments]," stated EU Budget and Financial Programming Commissioner, Janusz Lewandowski. So as to reach this goal, the Commission has put forward 'measures that will reduce their costs and workload caused by excessively heavy procedures".

Indeed, the Commission notably adopted a measure which would raise the current ceiling under which grants require simpler administrative procedures from €25 000 to €50 000.

Also among the changes made is that EU fund beneficiaries will have to demonstrate that they have undertaken the specific tasks funded effectively and efficiently instead of reporting individual cost items. This would enable the Commission to set the amounts depending on the nature of the programme and remains in line with Commissioner Lewandowski's longer term goal of shifting EU funding 'from merely reimbursing bills to rewarding performance".

Reacting to the changes made to the financial regulation, CEMR President Michael Häupl stated that 'CEMR welcomes the Commission's pragmatic approach and fully supports further initiatives that would reduce the administrative burden for local and regional authorities when dealing with EU funding."

Furthermore, public-private partnerships would be given the option to operate under national legislation of the country where they are based. According to the Commission, this option would make it easier to pool EU resources together. While these partnerships already exist at EU level and manage significant resources, they currently have to adhere to all EU budgetary and financial rules, despite these not being meant for private businesses.

'The Commission's review of EU financial rules is in line with our response to the consultation on the subject, which the Commission had launched earlier this year," underlined Häupl. 'This consultation was on the structural funds, but many comments are also valid for other EU funding mechanisms."

The EU financial regulation, last revised in 2007, sets the principles of the EU budget and governs the way the budget appropriations are spent. The changes proposed by the Commission need to be adopted by the European Parliament and the Council of the EU. The Commission expects the legislative process to be completed by the end of 2011.