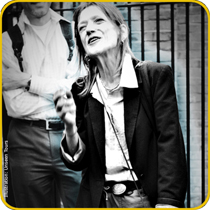 London's homeless give alternative guided tours of the city

Throughout the month of August 2010, tourists visiting London were able to take unconventional walking tours, dubbed Unseen Tours, of London with homeless or vulnerably housed individuals as their tour guides.

Unseen Tours is a pilot scheme, launched by a grassroots volunteer network called The Sock Mob, which helps homeless people find sustainable jobs as tour guides on the streets they lived on. The tours are located in the London Bridge or Shoreditch neighbourhoods where tourists are shown the usual attractions as well as a firsthand glimpse of street life.

The main objective of the tours is to shed light on the situations faced by the homeless so as to show society what they have to offer and to get more of an understanding of what it is like to be on the streets. The tours also give the homeless more of a sense of ownership of their own lives.
The guides, who are trained by the Sock Mob, keep the majority of the cost of the tour (5 pounds), the remaining profits being reinvested back into the enterprise so as to train more guides.

The Sock Mob hopes to continue with the guided tours over the course of the coming winter in the hopes of making the pilot a replicable model in other cities.