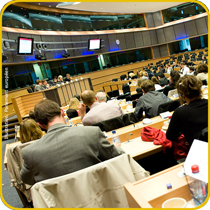 The Council of European Municipalities and Regions (CEMR) brings into question the added value of a legal instrument for service concessions, as expressed by Angelika Poth-Mögele,.CEMR Director of Policy, at the occasion of the European Parliament Public Service Intergroup meeting on 6 October 2010.

She further expressed CEMR's surprise that the European Commission is considering such a proposal, especially seeing as service concessions had been explicitly excluded from the 2004 public procurement directives, as raised by Heide Rühle, German Green MEP and rapporteur of the recently adopted resolution on new developments in public procurement.

This exclusion is vital as it provides public authorities with a greater degree of flexibility when it comes to deciding how to provide, commission and organise public services, as outlined in the new Lisbon Treaty provisions. Indeed, Rühle urged the Commission to respect local and regional self-government and added that recent Court of Justice of the EU judgements also provided further clarification.

Poth-Mögele highlighted that the 2004 public procurement directives saw the introduction of a high level of complexity and legal uncertainty. She thus welcomed the Commission's evaluation of these, while expressing the hope 'that local and regional authorities will be involved in the preparation as well as in the carrying-out of the directive re-evaluations".

Indeed, public procurement rules should be simplified as well as respect the full discretion of local and regional authorities on setting priorities of selection criteria for the purchase and order of goods, works and services by public authorities, as underlined in CEMR's policy paper on public procurement.
Public Services Intergroup meeting summary - 6 October 2010 (available only in French)