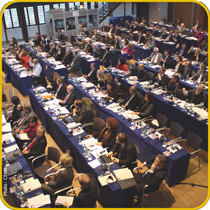 Some 170 local and regional elected representatives met in Mondorf-les-Bains, Luxemburg, at the occasion of the Council of European Municipalities and Regions (CEMR)'s Policy Committee. Those present.notably discussed and voted on the EU budget review and the minimal representation of genders in Committee delegations.
The Committee, which was held on 6 and 7 December 2010, also saw the election of CEMR's new political structure, including that of its new President, Wolfgang Schuster, Mayor of Stuttgart and President of CEMR's German section.
EU Budget Review
The response to the European Commission's consultation on the EU budget review communication, adopted by the Policy Committee members, notably outlined the need to render the partnership principle mandatory and have it include the local level.
The response also highlighted CEMR's hope to see growth replaced by development, and quantity by quality, as the EU's overarching priorities should not limit themselves to growth, competitiveness and the Single Market.
Moreover, it was agreed that cohesion policy and structural funds should not be considered as a tool for the implementation of the Europe 2020 strategy, as social, territorial and economic cohesion are among the EU's objectives and enshrined in the Lisbon Treaty.
The European Investment Bank at the local and regional level
A representative from the European Investment Bank (EIB), Stéphane Viallon, addressed CEMR's Policy Committee members in the hopes of demonstrating the increasingly close relationship developing between the EIB and decentralised levels of government. 'The EIB would welcome a partnership with CEMR and its member associations so as to better inform local and regional authorities of the activities and possibilities the EIB can offer to decentralised levels of government."
Gender equality: practice what we preach!
CEMR's Policy Committee voted to apply, for the first time, a rule on the minimum representation of both genders in the Committee delegations, which marks a concrete step towards ensuring the fundamental balance of the organisation's political leadership.
Also, CEMR elected two women as Co-Presidents, Aina Calvo Sastre, Mayor of Palma de Mallorca, member of the Executive Committee of the FEMP, and Annemarie Jorritsma, Mayor of Almere, President of VNG. These choices mark the first time in CEMR's history that women occupy such a high position in the organisation's political structure.
Finally, the dates of CEMR's next General Assembly, which is to take place from 19 to 21 September 2012, in Cádiz, Spain, were determined and accepted by the Policy Committee.