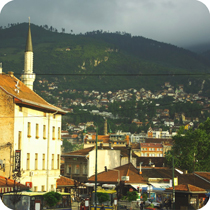 NEXPO 2011, the first regional municipal fair to bring together local governments from all over South-Eastern Europe to discuss innovative approaches in social inclusion, energy efficiency,.sustainable tourism and twinning, is to take place on 10 and 11 March 2011 in Sarajevo, Bosnia and Herzegovina.
The fair, entitled 'Innovative communities open for all", will allow for municipalities to share their achievements, learn from one another and explore new technologies with a number of representatives of associations of local authorities, government officials, consultants, contractors, and investors, among others.
A side event has also been planned to promote the extension of the Covenant of Mayors to the Western Balkans.
NEXPO 2011 is organised by the Network of Associations of Local Authorities of South-East Europe (NALAS) in collaboration with the Association of Municipalities and Cities of the Federation of Bosnia and Herzegovina (SOGFBIH) and the City of Sarajevo, with the support of the Association of Towns and Municipalities of Republic of Srpska (ALVRS). Both aforementioned associations are also member associations of the Council of European Municipalities and Regions (CEMR).
Practical information

For more information on the fair, please visit the NEXPO 2011 website.