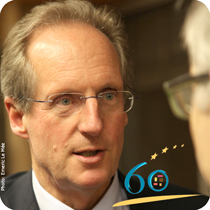 Local and regional Europe celebrated the birth of the European municipal movement at the occasion of the Council of European Municipalities and Regions (CEMR)'s 60th anniversary, on 28 January 2011, in Geneva, Switzerland.
'In the future, local and regional authorities and their representative associations want to be more than just a partner to the European institutions: we want to be a part of the European governance. Our associations, our cities and regions must be considered as the best relay of European policies on the ground, as well as active partners in the definition of future policies within Europe. The Europe we love is the Europe which knows how to build common solutions," Wolfgang Schuster, President of CEMR and of its German section, RGRE, Mayor of Stuttgart.
'The European municipal movement, launched 60 years ago, hoped to ensure that cities and regions became partners to be reckoned with. Today, cities are the laboratories of tomorrow and we are convinced that they must continue exchanging best practices and, if possible, addressing states with one common voice," Sandrine Salerno, Mayor of Geneva.
Charter on Local Autonomy: a vital tool for good governance

'The Charter of Local Self-Government of the Council of Europe, which was inspired by CEMR's European Charter of Local Liberties, is a fundamental text for municipalities and regions. Indeed, it has proved to be a vital instrument and a true reference when it comes to the organisation of governance and the maintaining of democracies where decision-making lies close to the citizens," Françoise Jeanneret, President of CEMR's Swiss section, the ASCCRE, Councillor of Neuchâtel.

'CEMR's founding aims include the promotion of a federation of states based on local autonomy and, today, it is our job to pursue this founding conviction so as to face the challenges of this century, characterised by the political and institutional unity of our European continent," Valéry Giscard d'Estaing, CEMR Emeritus President, former President of France and of the European Convention.

The seminar, entitled 'CEMR Building Europe from the Ground-Up for 60 years", was organised by CEMR and its Swiss section, the ASCCRE, at the invitation of the City of Geneva, and under the patronage of M. Giscard D'Estaing.
Photos of the event, Seminar programme and more information on CEMR.
Article on local and regional Europe's 60th anniversary year.