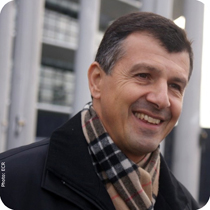 Oldřich Vlasák, executive president at the Council of European Municipalities and Regions (CEMR) since 2005, was elected vice-president of the European Parliament on 18 January 2012 in Strasbourg, France.

Greatly involved in CEMR’s activities over the years, Vlasák has notably helped improve cooperation between the local and regional umbrella organisation and the European Parliament.  This was all the more enhanced thanks to his experience as former mayor of Hradec Kralové, Czech Republic, and as current vice-president of the Union of Towns and Municipalities of the Czech Republic (SMOCR), a CEMR national member association.

Vlasák is one among 14 vice-presidents to have been elected along with the new president of the European Parliament, Martin Schulz, for a period of two and a half years, until the beginning of the next legislature in July 2014.