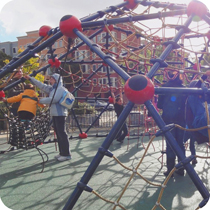 The City of Oldenburg, in Germany, has received the European Cities for Children Award of Excellence for its project “Donnerschwee becomes fit for leisure”, which aimed at revitalising the vacant city district of Donnerschwee.

The award ceremony, which took place on 14 May 2012, revolved around the theme of child-friendly neighbourhood planning and saw 22 cities from ten countries submit entries.

“The winning initiative is very forward-looking as it is not only about a single project but rather about a whole process stretching over a long period of time,” explains Wolfgang Schuster, mayor of Stuttgart and president of both the Council of European Municipalities and Regions (CEMR) and the Cities for Children network.  Indeed, the rehabilitation of Donnerschwee has also had a positive impact on the other districts of Oldenburg, which have based forthcoming initiatives on the results of the project.

“The Cities for Children award aims at encouraging cities to apply innovative projects in their neighbourhoods,” adds Frédéric Vallier, CEMR secretary general.  “These projects provide useful guidelines on how to involve children in the city’s economic and social life so that they become a genuine part of the city.”

The cities of Reggio Emilia in Italy, Maribor in Slovenia and Hamm in Germany were also nominated by the international jury, of which CEMR was a member.  The network of Cities for Children, created in 2007, currently includes 71 cities from 32 European countries.