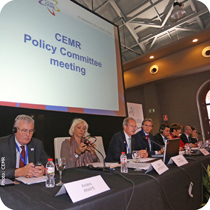 The Council of European Municipalities and Regions (CEMR)’s Policy Committee met in Cadiz, Spain, on 26 September 2012 at the occasion of its 25th General Assembly.

The mayor of Cadiz, Teófila Martínez Sáiz, and president of the Province of Cadiz, José Loaiza García, welcomed policy committee members to the city, which is celebrating the 200th anniversary of the Spanish constitution, the world’s third oldest democratic constitution.  “I hope that CEMR’s work over the next three days will benefit all local and regional authorities both from Europe and Latin America.”

Íñigo de la Serna Hernáiz, the mayor of Santander and president of the Spanish Federation of Municipalities and Provinces (FEMP), CEMR’s Spanish member association, repeated the mayor’s words and welcomed the fact that the Congress was open to Latin American municipalities and regions.  He underlined the importance of the role of local and regional governments in shaping European and international policies, all the more so via networks of associations such as CEMR at European level and the FEMP at national level.  In conclusion, de la Serna Hernáiz stressed the importance of actively standing up for municipalities, regions and the citizens they represent in these times of crisis.

The EU budget at the service of local and regional Europe

A decisive step for the future of the European Union multiannual financial framework will be taken in November 2012, explained Patrizio Fiorilli, spokesperson for the EU budget and financial programming.  “Local and regional authorities need to act.  The time for speeches and statements is over and the time to talk to your national governments has come,” he told Policy Committee members.  According to Fiorilli, national governments need to understand that giving money to the EU is not throwing it out the window as “one euro spent at the EU level can generate up to €14 on the ground, via grants to businesses and scientists, agriculture subsidies and other.  Over 90% of the EU budget goes back to Europe’s towns and regions.  Thus, cutting future EU budgets will harm our towns and regions rather than EU institutions.”  He finished his address by stressing that “savings alone will not take us out of the crisis; we also need to invest, and the EU budget can be a catalyst for growth”.

The deputy head of the European Commission "Citizens' Policy" Unit, Joachim Ott, spoke of the Commission’s initiative “Broad Debate” launched in the framework of the 2013 European Year of Citizens.  The European year will be an important one for CEMR, which coordinates and promotes twinning links in Europe as a tool for active citizenship.  These debates will bring European commissioners to cities all across Europe in order to establish a direct dialogue between the European level and citizens.  The first debate of the series will take place in Cadiz on 27 September with the vice-president of the European Commission for justice, fundamental rights and citizenship, Viviane Reding.

The General Assembly will last from 26 to 28 September 2012, with 700 participants from over 40 countries in Europe and abroad.