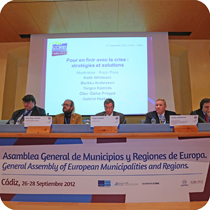 CEMR General Assembly:Crisis and recovery strategies at heart of debates in Cadiz

Deepen decentralisation but also revive the link between public authorities and citizens: these are among the solutions proposed by the speakers and participants of a session on "Crisis exit strategies", which took place on 27 September from 11:30 to 13:00, during the General Assembly of European Municipalities and Regions.

During his speech, the mayor of Athens Yorgos Kaminis, presented the economic, social and fiscal situation in Greece and its capital city. Unemployment rates are at 23%, one out of four shops has been closed for the past last six months, poverty as increased and income for social services has decreased by 60%; the crisis is indeed hitting Greek municipalities. However, he stressed that "having neither the means nor the competencies, I cannot be held responsible for what happens in Athens. The problems have come from the national and not the local level." He also supported the statements made by the president of the Congress of Local and Regional Authorities of the Council of Europe, Keith Whitmore, and the mayor of Jyväskylä, Markku Andersson, stipulating that decentralisation is one of the keys to exiting the crisis.

The need to strengthen the trust of citizens vis-à-vis their elected officials was among one of the alternatives put forward to help restore social cohesion and to cope with the crisis. A councillor of the City of Rykjavík, Ólafur Óttarr Proppé, stressed the importance of giving people the means to express themselves and especially to relate to their elected representatives, whether through the use of less technical language but also through a less formal dress code.

The session was moderated by the director general of the Association of Netherlands Municipalities (VNG), Ralph Pans.