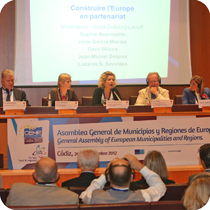 The construction of a European identity was underlined as being vital in these times of social, economic and political unrest, as relations between citizens, politicians and levels of governance have become increasingly strained.

“Town twinning links are very important when it comes to establishing and maintaining relations, especially in these difficult times,” stated Dave Wilcox, OBE, Local Government Association and Derbyshire County Council.  “However, these links need to be reviewed and revisited given the current situation.”

Sophie Beernaerts, Head of the European Commission “Europe for Citizens” Unit, assured participants that the new “Europe for citizens” programme would put an emphasis on the construction of citizenship through a more holistic approach instead of basing itself simply on common historical heritage.  She said the programme should receive approval from the appropriate political channels shortly and begin early 2014.