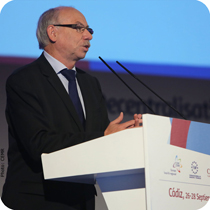 Address of the EU budget commission at CEMR General Assembly: "It is time for local and regional authorities to act"

“I call on local and regional authorities to convince their national governments to avoid cutting the future budget of the European Union.”  Such was the main message expressed by the European commissioner for budget and financial programming, Janusz Lewandowski, at the occasion of the final plenary session of the Council of European Municipalities and Regions (CEMR)’s General Assembly, on 28 September 2012.

"If you want something done right, do it yourself,” declared the commissioner.  “The time to talk to your national governments has come, as the EU budget is, directly or indirectly, a budget for Europe's local and regional authorities.”

The commissioner notably underlined that "even though, at 1% of the EU gross national income (GNI), the EU budget is rather small, it can still make a difference in these times of crisis.  And one euro spent at the EU level can generate up to fourteen euros on the ground."

Towards a European tax?

The idea of a European budget funded via a European tax was also mentioned by the commissioner, who declared that “the European Union should be able to finance itself thanks to own resources, which would help reduce the direct contribution of national budgets to the European budget."  To this effect, Janusz Lewandowski hopes to work towards constituting a group of voluntary countries.

During the debate following the budget commissioner’s address, European member of parliament and president of the European Movement International, Jo Leinen, underlined that “we should open the debate and not be scared of discussing a European tax.  Unfortunately, there exists today a perception that the European budget is money spent in Brussels, even though this is not the case.”