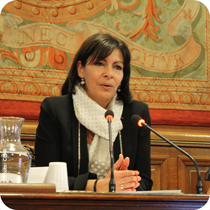 The Policy Committee of the Council of European Municipalities and Regions (CEMR) gathered in Paris on 30 January 2013, at the invitation of the City of Paris.

The meeting host and first deputy mayor of Paris, Anne Hidalgo, kicked-off the debate with praise for the work undertaken by CEMR in the field of gender equality.  She welcomed the creation of the Observatory on the European Charter for Equality of Women and Men in Local Life and invited members of the CEMR Policy Committee to join in for the launch of the Observatory’s website during the Global Conference of local elected women on 1 February.

In line with the commitments outlined within the Charter, the Policy Committee amended CEMR’s rules of procedure, thus improving the representation of men and women in its political bodies, the proportion having been increased to at least 40% representation per gender.  Its national delegations will therefore have to respect this equilibrium when designating new members after the next local or regional elections in their respective countries.

The Policy Committee approved two new requests for membership: the Congress of Local Authorities from Moldova (CALM) and the Ukrainian Association of District and Regional Councils (UADRC).  CEMR now has 57 national member associations of local and regional government in 41 countries.  CEMR president, Wolfgang Schuster, welcomed the two new associations to the CEMR family.  He also saluted the new president of the French section of the Council of European Municipalities and Regions (AFCCRE) and mayor of Bordeaux, Alain Juppé.

The Policy Committee also adopted the draft budget and 2013 work programme and approved the decision to close CEMR’s office in Paris.

Finally, two debates were organised at this occasion, the first on potential post-crisis institutional models for Europe and the second on the contribution of local governments to a new model of development in Europe and the world.

Photos taken at the occasion of the Policy Committee