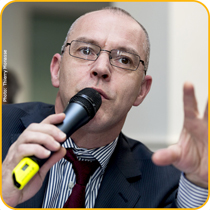 The secretary general of the Council of European Municipalities and Regions (CEMR), Frédéric Vallier, moderated a workshop on post-2015 development cooperation, including related objectives for sustainable development and aid effectiveness in the Mediterranean.

The workshop was held in the framework of the United Cities and Local Governments (UCLG)’s Forum of local and regional authorities of the Mediterranean, held on 3 and 4 April 2013 in Marseille, France.

At this occasion, local and regional elected officials from 24 Mediterranean countries met to discuss the political, social and economic difficulties encountered in the region, drawing particular attention to the difficulties faced by young people.

A declaration was released with a number of key messages for heads of state and government, parliamentarians, civil society and international donors.  The declaration is available in English.