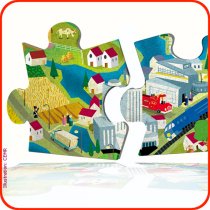 The Council of European Municipalities and Regions (CEMR) welcomes the European Commission integrating detailed provisions on local development strategies and partnership contracts in its regulation on the future of EU cohesion policy for the increased involvement of local authorities in the development and implementation of operational programmes.
The Commission's regulation, published on 6 October 2011, allows for local development, which encompasses both urban and rural-urban issues, to become a key priority in operational programmes, as long as it proves to have an added value vis-à-vis other methods.
Following a call issued notably by CEMR, the European Commission is also to include a set of criteria to determine the validity of a local development strategy. CEMR has declared itself willing to support the Commission in determining these criteria.
Furthermore, CEMR strongly supports local development activities being carried out via a common strategic framework (CSF) in order to reach common objectives, as included by the Commission in its newly published regulation. Indeed, the European Regional Development Fund (ERDF), the European Agricultural Fund for Rural Development (EAFRD), the European Fisheries Fund (EFF), and the European Social Fund (ESF) will now see similar implementation and eligibility rules applied to all of them.
'We are also very pleased that the Commission has agreed to designate a lead fund for when the implementation of a local development strategy requires support from more than one fund," declares CEMR secretary general, Frédéric Vallier. This lead fund will thus be in charge of covering certain costs, including running costs, animation and networking activities.
CEMR is now ready to continue working with the EU institutions in order to secure a final regulation on the future of cohesion policy.
CEMR policy paper on the future of EU cohesion policy