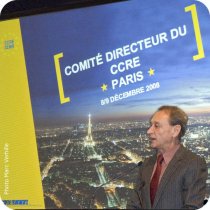 The Policy Committee of the Council of European Municipalities and Regions (CEMR) met in Paris on 8 and 9 December 2008. Many speakers focused on the global financial crisis and its impact on Europe's towns and regions.
The host of the meeting, mayor of Paris Bertrand Delanoë called on Europe's leaders to understand that local and regional authorities can bring solutions. Innovative solutions often emanate from towns and regions; besides our local and regional authorities are the engine that drives economic growth through public investment.
The mayor of Paris also called for local authorities to create a databank gathering the best ideas in terms of local economic development.
The president of CEMR and mayor of Vienna Michael Häupl echoed Bertrand Delanoë's views: This financial crisis is global, but its solutions are first and foremost local. Europe cannot hope to solve it without working very closely with our local and regional authorities.
The Policy Committee meeting was organised in cooperation with CEMR's French association AFCCRE. Its president Louis Le Pensec stressed the benefits of Europe in the current financial turmoil: Let us be frank, thanks to the Euro, our financial situation is not as bad as it could have been. The Euro shielded us from the crisis' worst effects. I can only express the regret that it takes crises for some to hear and appreciate the European message and ideal.
The co-host and president of Ile-de-France region Jean-Paul Huchon stated that future historians will say about the 2008 financial crisis that the world rediscovered the importance of economic regulation and public intervention. For us in France, our shelter is Europe. As the world is entangled in one of its worst financial crises, thank God we have the European Union! Thank God we have the Euro! Local and regional authorities must play their role, by their investments, by intervening directly. For this reason, we welcome CEMR's commitment to public services in Europe.
Good practice in consultation...
The Policy Committee also adopted a "code of good practice on consultation". It aims, by defining a Europe-wide set of principles, to help associations of local and regional authorities in discussions with their national government, and to convince the latter to adopt these principles.
...and Croatia joins CEMR
The Policy Committee also approved the application for CEMR membership from the Croatian Counties Association, and from the Irish Local Government Management Services Board (LGMSB) as associate member.
CEMR's members are now 53, covering 38 countries.
Over 200 representatives from 31 countries attended the meeting.
Translate