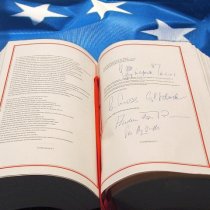 The Council of European Municipalities and Regions (CEMR) welcomes the text of the draft European Reform Treaty and calls the Inter-Governmental Conference to retain all the gains for regional and local government.
The draft European Reform Treaty* is a big step forward for local and regional government across Europe says CEMR Secretary-General Jeremy Smith. It preserves all of the key points in the Constitutional Treaty which strengthened the role of the local and regional levels. In addition, the new draft protocol on public services (or services of general interest) underlines the need for the EU to respect the wide discretion of local and regional authorities in the providing, commissioning and organising of our public services.
He added: We hope the Inter-Governmental Conference can accept all of these points without problem. The European Union cannot be a top-down creation - it needs the active involvement of all levels of government if we are to tackle successfully the issues that concern our citizens.
The key points specifically for local and regional government in the draft Treaty are (in addition to services of general interest):
* The draft European Reform Treaty is now being discussed in the Inter-Governmental Conference set up by Europe's heads of state and government at their Council meeting in Brussels last month. It aims to amend the Treaty on the European Union and the Treaty establishing the European Community.