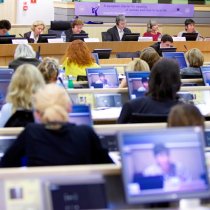 The Council of European Municipalities and Regions (CEMR) presented its charter on the equality of women and men in local life at the final conference of the project, on 20 and 21 February in Brussels. The charter aims at inciting local and regional governments in Europe to commit themselves to concrete measures for gender equality at all levels of local life.
More than 150 local representatives, experts and representatives from institutions and organisations from 25 European countries attended the final conference.
Vicenta Bosch Palanca, chair of CEMR's committee of women elected representatives of local and regional authorities said that due to the ever growing interest in the charter, it has become bigger then expected.
This project is a perfect example of transnational partnership in order to address a problem that concerns us all at the European level, said Luisella Pavan-Woolfe of the EU Commission's DG employment, social affairs & equal opportunities.
CEMR Secretary General Jeremy Smith stressed the fact that the charter is based on international and European statements of human rights like the European Social Charter or the European Charter of Fundamental Rights.
During the debates, the assembly agreed on preserving an ambitious text which will demand a strong engagement from the signatories. Final recommendations were made for every article. The participants concluded that a lot of work remains to be done in order to achieve the objectives of the charter. Its implementation will need the cooperation of all relevant actors at local, regional, state and European level.
The charter will be officially adopted at CEMR's General Assembly from 10 to 12 May in Innsbruck.
Proposals for amendments to the text can be sent to the CEMR Secretariat General until 15 March 2006.
CEMR's publication on the town for equality
CEMR's activities in the field of equal opportunities