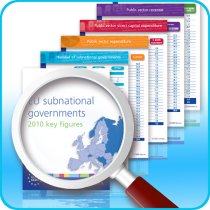 For the sixth year in a row, Dexia Crédit Local and the Council of European Municipalities and Regions (CEMR) have jointly published a figure-based portrait of local and regional Europe in the form of information sheets comprising a series of indicators that compare the organisation and finances of subnational authorities.

This publication, called Key Figures on Local and Regional Europe, lists data on the local and regional authorities in each of the 27 member countries of the European Union. How many municipalities, regions and intermediary authorities are there in each country in 2010-2011 following recent territorial re-organisation? What were local public-sector spending and investment levels in 2010, the year of transition between the crisis, stimulus and austerity? How, in such a special context, did local revenues change, and especially tax revenue? What are the local debt-to-GDP and local debt/public debt ratios for 2010?

This financial table is completed by data on the EU member-state allocations of structural and cohesion funds for 2007-2013, a calendar of forthcoming local and regional elections in the different European countries and, finally, twinning links between European municipalities.

The document lists a number of figures from Eurostat and other sources, as well as ratios that provide a better understanding of the economic weight of the local and regional public sector in Europe and the different member states.

The latest edition counts approximately 90 380 local and regional authorities in 2010-2011 in Europe, 89 150 or so of which are municipalities. Almost 60% of these municipalities are located in just three countries: France, Italy and Spain. The average European municipality had 5 630 inhabitants in 2010, a figure which can be as much as 90 times that in certain countries!

As regards expenditure, the European subnational public sector, which comprises, in addition to the local authorities, their public satellites and the German, Belgian and Austrian federated states, accounted for upwards of 2 000 billion euros worth of expenditure in 2010, i.e. 17% of GDP and 33.6% of public spending in the EU.

Although this expenditure relates mainly to the sectors of education (21%) and social action (20%), it also applies to the health (13%) and economic affairs (transport, economic development, etc.) sectors.

Subnational tax revenues amounted to just over €780 billion in 2010, i.e. 6.4% of GDP. Tax revenue accounts for almost 40% of subnational public sector resources, along with grants and subsidies, revenue from local public service fees and charges as well as asset-related revenue.

The 2011-2012 edition of Key Figures on Local and Regional Europe is available in English and French. Hard copies may be requested from CEMR or Dexia Crédit Local. An electronic version can also be downloaded from their respective websites (www.ccre.org, www.dexia.com et www.dexia-creditlocal.fr).

A detailed analysis of these figures and changes between 2000 and 2010 appears in an analytical note entitled "Subnational public finances in the European Union", published in July 2011 from provisional 2010 data. This note is also available on the Dexia Crédit Local website or upon request, from its research department (etudes-research [at] dexia.com).