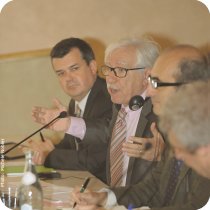 PLATFORMA* calls on the European Commission to clarify its approach to multi-actor partnerships and its strategy for working with local and regional authorities in the field of EU development cooperation.

Indeed, the European platform, which met in Florence, Italy, on 2 and 3 April 2012 for its annual forum, regrets to see that the preparatory consultation for the Commission’s communication on what could be its future strategy for multi-actor partnerships in development exclusively concerns civil society organisations.  The communication is due out in October 2012.

"In recent years, the Commission has increasingly recognised the role of local and regional authorities in development policies.  Thus, the forthcoming communication, which exclusively refers to civil society organisations, comes as a surprise to us," declares Pierre Schapira, deputy mayor of Paris and PLATFORMA spokesperson.  “The communication is meant to be a political response to the structured dialogue, which was based on a multi-actor approach.  Today, we ask that the Commission strengthen its partnership with each of these actors, but without bias, as this would risk going against the structured dialogue’s multi-actor approach.”

“This omission is all the more regrettable when considering the Commission’s proposal to create a policy forum for development as a continuation of the structured dialogue, which ended in May 2011,” explains Carles Llorens i Vila, director general for development cooperation at the Catalonia region and PLATFORMA spokesperson.  “PLATFORMA takes note of the creation of this forum, its aim being to further the discussion on development cooperation at the EU level, with the Commission, the European Parliament, member states, PLATFORMA and civil society organisations.”

Finally, participants of the forum call on the European Parliament and Council of the EU to adopt the Commission’s proposal to maintain the non-state actors and local authorities programme and to increase its budget from €1.3 billion to €2 billion for the 2014-2020 EU programming period.

The PLATFORMA Forum, entitled “Development and participatory governance – Which multi-actor partnerships in Europe and in partner countries?”, was organised in cooperation with the Italian section of the Council of European Municipalities and Regions (AICCRE) and the Tuscany Region.  The Forum brought together over one hundred representatives of local and regional authorities, civil society organisations and European institutions from twenty countries.