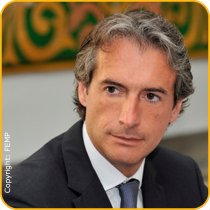 In 2015, national governments around the world will define a set of objectives to guide the sustainable development policies for the next 15 years, for instance in the field of gender equality or access to healthcare.

With this fast-approaching deadline in mind, local authorities and their representative associations worldwide join their voices to call for the inclusion of a specific objective dedicated to "sustainable urbanisation". With 70% of the world population living in urban areas by the middle of this century, it is essential to examine more closely the challenges of sustainable urbanisation.

Speaking at the UN on 13 December, at the occasion of a meeting of the global taskforce of local and regional governments, CEMR co-president, Iñigo de la Serna*, underlined that the challenge of sustainable urbanisation must be a pillar of the post-2015 agenda . This assumes that cities and territories are in vital need of economic growth, which has to contribute to social equity, quality of the environment and territorial cohesion.

The meeting was also an opportunity to present to the United Nations secretary-general, Ban Ki-moon, some 160 letters from mayors and presidents of associations, including 40 in Europe, in support of an awareness campaign towards an objective of urban sustainable development.

The co-president was accompanied by CEMR secretary general, Frédéric Vallier, who said that local governments are not resigned to the role of mere onlookers, but are key players in the preparation for the post-2015 development agenda.


* Iñigo de la Serna is Mayor of Santander (Spain) and President of the Spanish Federation of Municipalities and Provinces (FEMP).