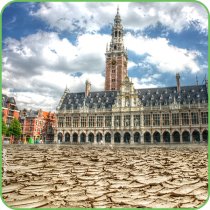 Climate change is occurring faster than expected and will continue moving forward. But are municipalities and local government fit for climate change? This is the backdrop to the debate organised by CEMR’s Flemish association (VVSG), on 7 May 2015, in Leuven (Belgium).

The Energy and Climate Day for Local Government will bring together 500 participants from cities, municipalities and other stakeholders to discuss climate mitigation and adaptation measures. How can local government put adaptation to climate change into practice? And how can Europe support local government through “Mayors adapt”, an EU initiative on climate change adaptation? These are some of the questions to be addressed during the event.

Concrete examples from six signatory cities of the Mayors adapt initiative - Antwerp, Ghent, Hasselt, Kortrijk, Leuven and Zwijndrecht - will also be presented at their current stage of development.