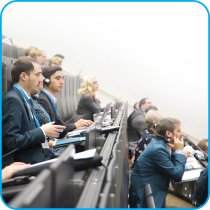 Missed the symposium “Control of local government activities”? Here are the highlights

“Control of local government activities: A threat to autonomy?”: this question was at the centre of our symposium bringing together researchers and elected politicians throughout Europe, from 26-27 June 2015, in Erlangen and Nuremberg.

The two-day event was organised by the Council of European Municipalities and Regions (CEMR), the research network OLA, the university Friedrich Alexander (FAU) of Erlangen and Nuremberg. It was structured around a series of workshops and roundtables allowing researchers and local elected representatives to explore the impact of administrative, democratic and financial controls on local government.

The Symposium began on Friday in Erlangen with a welcome speech of mayor of Erlangen, Florian Janik. Also invited to speak at the workshop on the control and supervision of administrative acts, mayor of Roeselare and president of the Association of Flemish Cities and Municipalities (VVSG), Luc Martens said: "Mayors are generally positive about the accompanying role of the supervisory authorities. Some, however, complain about the amount of control on and interference with all kinds of details."

His comments were echoed by CEMR Vice-president and president of the Norwegian association of local and regional authorities (KS), Gunn Marit Helgesen, moderating a roundtable on the next day. "In Norway, we are in the lucky situation that KS and the local government sector have an open dialogue with the State and the individual supervisory authorities, even if our desired level of supervisory detail is not always the same. We have belief that there must be good alternatives to a system for detailed state supervision and control. Such an alternative would involve systems self-regulation and a more fruitful collaboration with the state.”

In the afternoon, a series of studies were presented on the financial auditing of local government. In the ensuing discussion, the secretary general of the Union of cities and municipalities of Wallonia (UVCW), Louise Marie Bataille, outlined her concerns about the inadequacy of the new EU accounting rules. “The application of these provisions has already led to a serious reduction of investments at local and regional level, which have a negative impact on the way local government supports the delivery of services to citizens. With this in mind, there is a need for greater flexibility in the growth and stability pact rules.”