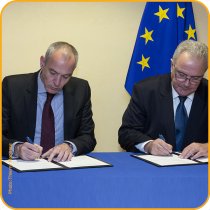 EU partnership with 100,000 European towns and regions kicks off!

“Development cooperation is a highly effective way to help tackle truly global issues including climate change, migration, gender equality, economic growth and others across the world," says Frédéric Vallier. "When implemented between towns or regions it gets even more efficient as the “micro-” approach is more concrete, more cost-effective and more relevant. Thanks to the EU Commission’s support PLATFORMA will be able to boost the concept of decentralised cooperation”.

Over the last thirty years Europe’s towns and regions have played an increasingly strong role in development cooperation by setting partnerships on a wide range of issues with their counterparts in Africa, Asia, the Far East and Latin America.

The strategic partnership aims to bolster decentralised cooperation by facilitating exchanges of best practice and skills between local and regional authorities from around the world. It amounts to 7.5 million euro over three years; the European Commission is financing 75% of the project with PLATFORMA’s partners providing the remaining 25%.

PLATFORMA was set up in 2008. It is a network of local and regional authorities and associations dedicated to strengthening development cooperation at the level of towns and regions.