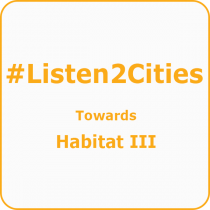 Global networks of local governments, civil society, and urban experts launch the #Listen2Cities campaign to call on the international community to listen to cities and territories in the negotiations on the New Urban Agenda that will be adopted at Habitat III.

On the eve of the Habitat III Local Authority Hearings in New York, local and regional governments are raising our voices to call on national governments to take into account the work that local governments, civil society organizations and social movements have already done on the New Urban Agenda. We call for UN Member States to heed the recommendations of these constituencies during the Habitat III negotiations.

Local and regional governments are on the front line of dealing with the daily challenges of urban and territorial development. We have been working together, through our regional, global and thematic networks to share our knowledge and draw up joint recommendations for the Habitat III process. We have brought our experience and perspectives to the Habitat III Policy Units and Regional and Thematic Meetings, and to the specific Local Authority Hearings held for our constituency.

However, only national governments have a seat at the table at the final negotiation table. We’re calling on national leaders to listen to cities and territories and to harness our collective experience and wisdom to ensure a New Urban Agenda that takes into account the proposals of the local and regional governments that will be responsible for implementing it on the ground. If they fail to do so, the Agenda risks ending up as a declaration of good intentions with little real impact, as was the case with Habitat II.

Do you think states and the UN should listen to cities at Habitat III?

We invite everyone who cares about cities and wants to include a local perspective in the New Urban Agenda to join our campaign on Twitter using the hashtag #Listen2Cities and #Habitat3 and share your ideas.

What do cities want from the New Urban Agenda? Check out our recommendations!