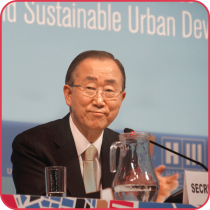 What to expect from the world's largest conference on urban development

Finally – after dozens of preparatory meetings and tireless negotiations – it is here at last: Habitat III, the United Nations Conference on Housing and Sustainable Urban Development, starts today, Monday 17 October, in Quito (Ecuador) and will go on until Wednesday 20. Here is what to expect from this event:

1 Historical act: the official adoption of the New Urban Agenda

Under the eyes of leaders such as UN secretary general Ban Ki-moon and President of Ecuador Rafael Correa, the New Urban Agenda will be adopted in Quito. With a significant impact on our towns and cities, changing the way we build, move and live together, the New Urban Agenda helps make a sustainable urban future a reality.

300+ local and regional leaders unite: together for a sustainable future

1.    The Urban Agenda on the ground: how do towns and cities make it work?

Agreeing on and adopting a New Urban Agenda is a great step. How local governments will make it work on the ground is next main challenge. CEMR and PLATFORMA are organising a side event on this on 18/10, from 8 to 9 am.

The New Urban Agenda identifies crime and violence as big challenges on the road to sustainable urban development worldwide. UN Habitat is well aware of this, and so they will be organising a special session on the issue (18/10, 1 pm to 3 pm). Mayor of Santander and President of CEMR Iñigo de la Serna will be participating in this session.

What does the urban agenda look like in the EU? How does it work, and how does the EU help towns and regions have a more sustainable urban development? The European Commission’s Directorate general for Regional and Urban Policy is organising an event addressing these questions and more on 18/10, from 2 to 4 pm. Mayor of Utrecht and President of CEMR’s Dutch member association VNG, Jan van Zanen will be taking part.

The New Urban Agenda has many implications for urban governance. Whether it’s governance in partnership, the subsidiarity principle or network governance, many new aspects need to be considered. UN Habitat, with the coordination of UCLG and LSE, is organising a dialogue to discuss this on 18/10, from 3 to 6 pm. Councillor of Malmö and CEMR spokesperson on cohesion policy, Ilmar Reepalu, has accepted the UN’s invitation and will be participating.

Many African towns and cities need access to sufficient, safe and sustainable energy for their citizens. The Covenant of Mayors for Sub-Saharan Africa helps make this possible – while simultaneously stimulating local development. The Covenant of Mayors office for Sub-Saharan Africa is organising a side event to present the project on 20/10, from 11 am to 12. CEMR and PLATFORMA will be taking part in this event.