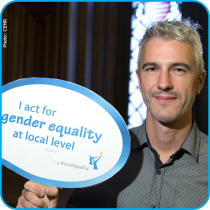 How can we close the gender pay gap? The answer with our spokesperson on gender equality

How can we close the gender pay gap? On the occasion of European Equal Pay Day, mayor of Galdakao (Basque Country, Spain) and CEMR spokesperson for gender equality, Ibon Uribe, shares his perspective on this question.

“On European Equal Pay Day, we seek a fair and equal society where women and men are paid equally for the same work. When women’s hourly wages are 16.7% less than those of their male colleagues, we cannot say that their talents and skills are being fully valued.

How can we level out inequalities?

As employers, they can ensure non-biased recruitment procedures and provide fair and transparent promotion and career development opportunities to both sexes. Through education, they can also encourage women and men to pursue careers that are not generally attributed to their gender. Finally, through providing affordable, high-quality care services, they can enable more women to enter the labour market.

Ten years ago, the Council of European Municipalities and Regions, together with its member associations, launched the European Charter for Equality of Women and Men in Local Life. By signing it, local governments commit to its principles, including Article 11 covering the issue of equal pay. Since 2006, hundreds of projects in several areas - working conditions, employment, health and mobility - have been developed by European towns, regions and associations of local government.

On 12 and 13 December 2016, we will celebrate the tenth anniversary of the Charter on the occasion of CEMR’s policy committee meeting in Maastricht. It will be an opportunity to look back at what we have achieved since its launch and to set out orientations for the future.

After Maastricht, we invite you to Bilbao in 2018, for the largest European conference on equality and diversity. This major event is meant for local politicians and the civil society to discuss further actions to tackle inequalities in their territories. The conference will be organised by CEMR, our Basque association (EUDEL) and the Bilbao City Council.

Equal pay day is important, but at the same time, it is revealing that we even need to have such an event. If we all work together towards greater gender equality, we can achieve a future in which equal pay day is not a call to close the gender pay gap, but a celebration of how far we have come.”

"At the current rate, it would take over 70 years to achieve equal pay."