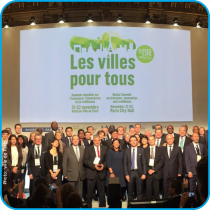 This article is a column by CEMR secretary general, Frédéric Vallier. It was published by Martin Ruelle in LA TRIBUNE, during the Cities for Life summit in Paris from 21 to 22 November 2016.

Climate change, globalisation or reducing inequalities: the main challenges facing the world today cannot be overcome without the determined commitment of towns and cities.

This leading role for towns and cities was clearly acknowledge by the UN in the scope of the Sustainable Development Goals (SDG), but also within the Paris agreement on climate and the New Urban Agenda (Habitat III).

During the Habitat III summit, the recognition of local action was strengthened with the inclusion of the concept of the “Right to the city” in the UN’s final declaration. Specifically, the “Right to the city” means each citizen has the right to enjoy their city’s resources and services in a fair, democratic and sustainable manner.

This is a great step forwards, as it is the first time in history that the UN recognises the role played by our cities in this way. This recognition needs to be materialised via national policies that aim to support local governments. It also needs to be met by a change in the distribution of national wealth. In Europe, cities only have access to 15% of public tax revenue. According to the negotiators of the global New Urban Agenda, this number should reach 20% for cities to be able to implement their policies.

The consequence of this recognition is decentralisation and the respect of the principle of subsidiarity. For the Council of European Municipalities and Regions, it is obvious that a decentralised society stimulates its democratic, social and human capital. It is visible when observing how countries such as Sweden or Austria are organised. We will see that decentralisation contributes to the success of these countries.

On the front of the fight against climate change, cities are responsible for 80% of greenhouse gas emissions worldwide. For 10 years, European mayors have been joining forces in a covenant to go beyond national and Europeans commitments. Today, this movement is intensifying at the global level under the impulse of the mayor of Paris. To support this approach, cities need to be given access to the UN’s Green Climate Fund.

Another challenge is the arrival of a large number of asylum seekers in Europe. In 2015, European states committed to relocating 160,000 refugees. Only 5,000 of them have been relocated so far. It is the task of states and European institutions to guarantee the necessary resources to host and integrate them, so that cities can guarantee adapted public services.

All these questions, and many others, will be examined at the occasion of a large European conference on equality, diversity and inclusion that CEMR is organising in Bilbao in June 2018. We hope to see you there.
The ‘Right to the city’ is an ambition that we can all contribute to. With the recognition to the ‘Right to the city’ and the role of cities in their contribution to global governance, we have the power and the obligation to do so. It is up to us, together, to make this dream a reality.