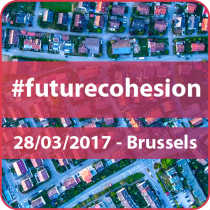 The future is territorial: Come to our event on the future of cohesion policy after 2020

In the future, central governments should have full power over how towns and regions invest. Access to EU funds should be made more complex. Citizens’ opinions should not matter. You think these ideas are absolutely wrong? So do we…

Come to our debate: “Paving the way for a more territorial Cohesion Policy after 2020”, on 28 March, to discuss how we can build a future we believe in, and what it should look like.

Gathering local and regional representatives, Members of the European Parliament and EU officials; the aim of this event is to debate key aspects of the future of Cohesion Policy after 2020. We will discuss how cohesion policy could be under threat and how to preserve it, as well as why the EU needs its territories. The debate will also address, on a broader level, what shape cohesion policy and territorial development should have in the future, and how the new programming period could be an opportunity to take citizens’ input on board. See more details in the full programme.

The debate will take place both between speakers and with the audience, so feel free to join in. It will be opened by a CEMR representative, followed by European Commission vice president for Jobs, Growth Investment and Competitiveness Jyrki Katainen.

This debate will take place in an open atmosphere that favours free discussion and the emergence of innovative ideas, experiences and proposals. Be aware that a delicious lunch buffet awaits you, and it’s on the house.

Join the debate on twitter with the hashtag #FutureCohesion. We will be tweeting too: @CCRECEMR.

Where? The House of European Municipalities and Regions, Square de Meeûs 1, B-1000 Brussels, Belgium