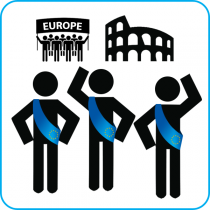 Local leaders fuel the movement for a Europe of unity, solidarity and tolerance

60 years ago, the Treaty of Rome was signed: this gave birth to a community uniting European countries; from the six founding members until almost thirty today, that would become the European Union. 60 years later, on 25 March 2017, women and men from all over the continent are gathering in Rome to march to show their attachment to the European project. On this occasion, the CEMR presidency will join the march for a future of peace, unity and local democracy.

CEMR secretary general Frédéric Vallier made the following statement on the march: “Beyond the celebrations, Europe and the world face challenges we cannot even measure.

Local and regional leaders will march in Rome for a renewed Europe, proud of what we have accomplished but clearly focused on the future. A Europe of towns and regions, that appreciates its values: democracy, equality, diversity and inclusion."

Do you want to come to Rome? Join us and march for Europe! On top of that, you can support the march on Twitter, with the hashtag #MarchForEurope2017 and #EU60. You can also follow @CCRECEMR to get live information straight from the march in Rome.