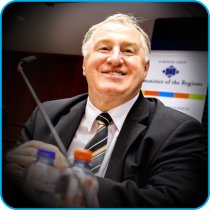 Meet Karl-Heinz Lambertz, the new President of the European Committee of the Regions

Karl-Heinz Lambertz was overwhelmingly elected President of the European Committee of the Regions on 12 July. Who is he? What is his background? Let’s get to know the man behind the title.

Mr Lambertz was born in Schoppen, Belgium, in 1952. After studying law, he was hired as an assistant professor, and became rapidly involved in local government issues. As early as 1990, he was appointed minister of the German-speaking Community of Belgium, which counts over 75,000 inhabitants. He went on to become Minister-President and Minister of Local Authorities in 2004, and is the President of the Community’s Parliament since 2014.

The Council of European Municipalities and Regions wishes to congratulate the new President for his election, and fully agrees with the powerful statement he made during his election speech: “A Union without cohesion policy is not the Europe that we want.”

“I wish to congratulate Karl-Heinz Lambertz upon his election as new President of the European Committee of the Regions. I am confident that he will continue on a path of close collaboration with the CEMR, in the interest of all local and regional governments, both big and small.

The CEMR and the European Committee of the Regions have always had a very close relationship, which was recently made even closer through the signature of a Memorandum of Understanding between our two organisations. More recently, we launched the Alliance for the future of cohesion policy together. We look forward to strengthening our ties at a crucial point in time for Europe’s democracy.”
About the European Committee of the Regions

The CoR was created in 1994. It is composed of 350 members – regional presidents, mayors or elected representatives of regions and cities – from the 28 EU countries. Members must be democratically elected and/or hold a political mandate in their home country. Through the CoR, EU local and regional authorities can have a say on the development of EU laws that impact regions and cities.