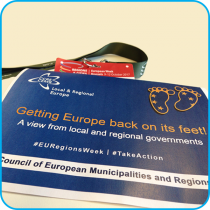 In the frame of the European Week of Regions and Cities (EWRC), the president of Emilia Romagna and CEMR, Stefano Bonaccini, signed an op-ed that was initially published by the European media Regional Review. In this text, president Bonaccini presents CEMR proposals to revive Europe with towns and regions as change agents.

When we look back over the past decade, we cannot deny that Europe has been tested on many fronts: economic growth, unemployment or even populism. But every crisis brings along new energy. I am confident that Europe’s future will be positive, as things are already improving.

Of course, there is no magic spell to solve the situation. Neither is it possible to predict with certainty what the EU will look like in the long term. But one thing is crystal clear to me: Europe cannot solely work through the prism of nation states any longer.

People experience Europe in towns and regions, and this is where we can regain their trust. This is why, as a regional leader and president of the Council of European Municipalities and Regions (CEMR), I believe that any discussion on Europe’s future must be based on local self-government and subsidiarity. Furthermore, the EU’s future governance structure must ensure towns and regions’ contribution to policy making.

To get Europe back on its feet, CEMR has developed five proposals to help us to move forward. However, let me clarify that when we, the CEMR, talk about Europe’s future, we think beyond the EU and look at our continent as a whole.

The top priority should be to ensure Europe gets closer to its citizens. According to the latest Eurobarometer survey, only one in two citizens trust the EU. By working with towns and regions, we could boost this trust.

We also cherish Europe’s diversity. Open borders and free movement of goods and people represent the essence of our diversity and strengthen unity around the continent. Hence, programmes supporting exchanges, like “Europe for citizens” or “Erasmus +”, should be maintained and expanded.

We also call for an inclusive, innovative and sustainable Europe. It is crucial to integrate a more social approach in all EU policies to deal with issues like youth unemployment, gender inequalities, climate change or refugee integration. But those policies should be implemented with a certain degree of flexibility, to allow towns and regions of all sizes to respond to the reality on the ground.

These issues and many more will be addressed at CEMR’s conference on equality, diversity and inclusion in Bilbao, in June 2018. It will be an opportunity to discover how Europe’s towns and regions can harness the rich diversity of our societies, transform that dynamism into impactful governance rooted in equal respect for all.

For Europe to become more effective, EU rules and regulations should not be too detailed. They should better take into account differences on the ground, allowing flexibility for towns and regions in pursuit of commonly agreed EU objectives.

Finally, the role that Europe plays in the world is crucial for its future. Just like the butterfly effect, what happens somewhere else on the planet can have a huge impact on the way things turn out here. For this reason, towns and regions and their national associations must have their say in the implementation of major global agendas, such as the UN Global Goals.

Traduire
During the European Week of Regions and Cities, CEMR organised a workshop on the future of Europe (11 October).