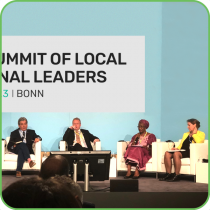 As the COP23 talks move into their second week in Bonn, a highpoint of the weekend was the Climate Summit of Local and Regional Leaders on 12 November. It culminated in the adoption of a declaration signed by 330 local and regional leaders worldwide: the Bonn-Fiji Commitment of Local & Regional leaders.

The Summit was also an opportunity for CEMR Co-President, KS President and Telemark Councillor Gunn Marit Helgesen to present the necessary priorities to achieve decarbonised societies. They are available here below as well as in PDF format.

1. Global climate agendas are only achieved with local action

Giving cities and regions leverage to fight climate change is the way forward to make a difference on the ground.  COP22’s outcomes were linked to the implementation of the Sustainable Development Goals and the Urban Agenda of Habitat III. In the EU, most of the specific commitments for local governments will come indirectly via a new EU climate regime where the local and regional level can boost the implementation of these agendas for 2030. As members of the UN constituency of Local Governments and Municipal Authorities, all European states have agreed to engage and take actions to reach the goals. The localisation process of the Agenda 2030 and climate aspects in particular should therefore come with a real commitment to strengthening multi-level and multi-sectorial alliances.

2. Appropriate financial and political frameworks are crucial to attain a sustainable future

Appropriate political and financial frameworks, innovative mitigation and adaptation policies and instruments (such as the transition towards a circular economy and a low-carbon society) and mainstream climate into all policies are the key factors to combat and adapt to climate change. National governments need to formally recognise the role of local governments in the decision-making processes, and acknowledge them as relevant components of the State structure, close to citizens, legitimate and accountable for their actions with the appropriate resources to accomplish their mission.

Strong and unified positions to fight climate change can be achieved if the involvement of all levels of government takes place at an early stage and actions are localised. We call on the EU and the international community which have ratified the Paris agreement to facilitate and implementation in dialogue with towns, cities and regions, in the Member States. This consideration should also come with the recognition and collaboration of global and regional programmes for cities’ actions such as the Global and regional covenants such as European and African Covenant.

4. Europe should reinforce the protection of the planet with our international partners

Any discussion about the future of Europe should be based on the recognition of the principles of local self-government, subsidiarity and proportionality. Local and regional governments play a key role as backbones of our states and societies at EU and international level. Efficient tools and governance structures should ensure these governments’ participation in shaping climate policies. They should build on the existing system, where local and regional governments and their representative organisations are instrumental in the development, implementation, monitoring and evaluation of climate and energy policies and legislation. CEMR and its member associations stand ready to contribute to the debates on the future of Europe and the European Union, which plays a key role internationally in climate negotiations.

Our cities have been developing expertise on sustainable urban planning, integrated territorial climate plans and decentralised partnerships have enabled this. The international community should promote this through its international development cooperation policy, particularly within the framework of the Global Covenant of Mayors or actions by PLATFORMA strategic partnership for development and decentralised cooperation. US President Donald Trump’s decision to withdraw from the Paris Climate Agreement is undisputedly bad news, but CEMR, together with it's global organisation UCLG and partners,  is ready to engage with all local and regional governments globally for climate. Thousands of European towns and regions already cooperate with their peers to implement environmental projects in developing countries and on south-south, north-south and north-north decentralised cooperation.