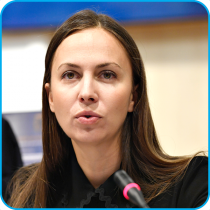 Member of the European Parliament Eva Maydell was elected President of the European Movement International (EMI), becoming the first woman and first eastern-European to ever occupy this position. She was elected on 24 November 2017 for a three year mandate.

Upon her election, the newly elected President Eva Maydell stated: “Truly understanding the big responsibility that EM International members gave me today, I want to thank them all for the support. I promise to respond with all my energy and lead the EM International in the creation of the new story for Europe; a story that tells more about our bright future on the continent than about our national past.”

Twelve people were also elected to the Board, including CEMR Vice President and Roeselare councillor, Luc Martens.

CEMR is a member of EMI and our Secretary General, Frédéric Vallier, was EMI Vice President from 2014 to 2017.