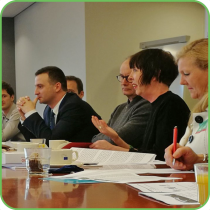 Towns and regions must be represented on an equal footing, alongside Member States

"We call on Member States to include towns and regions in the preparation and implementation of national plans to reach EU energy and climate goals, for the 2021-2030 period.” That was the essence of the message delivered by CEMR’s spokesperson for Environment and Lincolnshire councillor (LGA), Marianne Overton at a policy breakfast on 20 February.

The debate was hosted by MEPs Claude Turmes and Theresa Griffin, in the presence of the Deputy Minister of Energy of Bulgaria, Zhecho Stankov, as a representative of the Bulgarian presidency of the EU.

Now that the EU institutions are negotiating the governance regulation of the EU strategy on energy, we want to make sure that towns and regions are represented on an equal footing, alongside Member States.

But this has to happen in practice and on a regular basis, not only on paper. As councillor Overton puts it: “European legislators should include provisions obliging Member States to negotiate with the subnational governments to determine the ways to achieve the national energy efficiency targets.”

This call was strongly supported by MEP Claude Turmes, who stated: “The governance of the Energy Union goes local! Cities, regions, local authorities should be fully involved in the planning and reporting of energy and climate plans.”

European cities and regions are committed to become more energy efficient and sustainable while combating climate change. This is proven by over 7,700 cities that have joined the Covenant of Mayors and have set climate and energy actions aiming at reducing 40% of greenhouse gas emission by 2030.

MEPs, local government representatives and Bulgarian presidency members agreed that a greater involvement of European towns and regions is crucial to achieve our common goals of decarbonising our societies and creating green jobs. The outcome of this meeting will be brought to the negotiations between the Parliament, the Commission and the Council, under the Bulgarian presidency, ('trilogues') on 21 February.

The policy breakfast “Governing the Energy Union at the local level”*, is part of a series of meetings with MEPs Claude Turmes and Theresa Griffin on local governments’ role in the implementation of the EU Energy strategy. The first meeting took place in June 2017.

* “Governing the Energy Union at the local level” was co-organised by the main European networks of local and regional governments: CEMR, E3G, ICLEI, Energy Cities, EUROCITIES and Climate Alliance.

The ‘Clean Energy for all Europeans’ package sets out the bloc’s energy and climate policies for 2030, and is the European response to the Paris Agreement on climate change adopted in 2015.