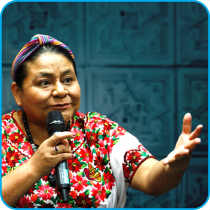 We are deeply honoured to welcome such an iconic figure. Let us walk through a few moments of her moving life story.

Rigoberta Menchú Tum was born on 9 January 1959 to a family of farmers of K’iche’ Maya descent in Laj Chimel, in the Guatemalan province of El Quiché.

After leaving school, Menchú worked as an activist campaigning against human rights violations committed by the Guatemalan armed forces during the country's civil war, which lasted from 1960 to 1996. Several members of her close family were tortured and murdered by the military dictatorship that in was in power in Guatemala at the time.

She joined the Committee of the Peasant Union (CUC) in 1979, following in the footsteps of her father, to defend the rights and lives of the indigenous people who were victims of the military dictatorship.

In the early 1980s, Ms Menchú was active in organising large demonstrations and strikes for better conditions for farm workers, and she also spent time educating the indigenous peasant population, helping them resist against massive military oppression.

Shortly after, due to threats made on her life, she had to go into exile in Mexico. She then began a new phase in her life, organising Guatemalan resistance from abroad.

16 women laureates out of 104 people awarded

In 1992, Rigoberta Menchú was awarded the Nobel peace prize for her tireless struggle to defend indigenous peoples and women’s rights. In 2006, Menchú was one of the founders of the Nobel Women's Initiative. Also worth noting is that although the peace prize is the most favourable to women, of the 104 individuals who have won a prize, just 16 have been women.

It is hard not to be humbled when reading such a story of resilience in the face of extreme hardship. Rigoberta Menchú reminds us in a very strong way of just how important it is to actively work for equality, diversity and inclusion in society, and not let the hateful drag our towns and regions down a different, dreadful path.

In Bilbao, we will be focusing on how to make our towns and regions – our homes – better, fairer and safer places for everyone. Read the full conference programme to see what this means. You will find plenty of information on all the sessions, workshops and presentations that will take place.

Register today and you will still benefit from the early bird fee. This fee is applicable until 5 March 2018.