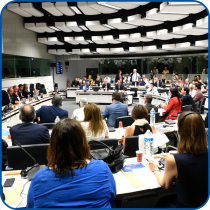 What future for Europe? More than thirty national associations of local and regional governments joined forces, on 4 July 2018, at the occasion of a debate organised at the European Committee of the Regions (CoR), in the context of the ongoing political reflection on the Future of Europe.

The event was broken down into the following streams: an inclusive Europe, a sustainable Europe and an innovative Europe. The outcomes that emerged from the discussions will be incorporated into a report on the future of Europe that the CoR will adopt at its plenary session, from 8 to 10 October.

During his opening speech, the president of the European Committee of the Regions, Karl-Heinz Lambertz, said he was honoured to have so many representatives from national associations of local and regional governments around the table. He recalled that “as the closest level of government, we must fully commit ourselves to the reflection on our common future, identify challenges and propose solutions”.

Invited to give a keynote address, the president of the Council of European Municipalities and Regions (CEMR), who is also President of the Italian association (AICCRE) and of the Region of Emilia-Romagna, Stefano Bonaccini, expressed satisfaction with the holding of such a meeting, the day after the adoption of the European Parliament’s resolution in plenary. He commented on the vote saying: “The text includes the request for CEMR to be permanently involved in the design of EU policy making, by way of a structured dialogue, where local and regional interests are concerned. This marks a noteworthy step towards the role of national associations in the institutional framework of the Union”.

Towards a more inclusive Europe

Coming under the event's spotlight was the issue of the integration of migrants and refugees. In this context, the speakers voiced their opinions and called for a more cohesive and inclusive Europe.

"Migrants' intergration must be set as a priority within the next multiannual financial framework", said Mayor of Utrecht and President of the Association of Dutch Municipalities (VNG), Jan Van Zanen. Referring to the 'Einstein Plan', a project that brings together young refugees and local residents in a district of ​​Utrecht, the mayor called for more support to cities and communities, as "in the end, integration begins and ends within local communities".

For his part, the mayor of Mannheim, also representing the Association of German Cities (Deutscher Städtetag) Peter Kurz emphasised the importance of increasing public acceptance and addressing the populations’ fears as a prerequisite for successful efforts in migration and integration policy. "To make integration a reality in our communities, we must encourage and value the idea of living together in diversity".

Refugee integration is always a local issue in the end. But wouldn't it be wrong to only focus on big cities?

In this regard, the representative of the Association of German Counties (Deutscher Landkreistag), Kay Ruge, explained: "Germany has already established internal quotas for the reception of refugees. Each municipality, big or small, has a defined intake, depending on a series of factors, including the number of inhabitants". He then pointed out that: "Refugee integration in smaller towns or rural areas can become an asset for local communities. It can support rural areas having difficulties in keeping their population and services by helping to repopulate communities and strengthen services".

And the Mayor of Soria, Carlos Martínez Mínguez, also representing the Spanish Association of municipalities and provinces (FEMP) concluded: "Today's Europe faces many challenges, including migration and climate change. It is up to us to act in accordance with our values, but also as a unifying framework, towards the achievement of the UN Sustainable Development Goals by 2030."

All photos taken at the occasion of the event are available here (by: Committee of the Regions).