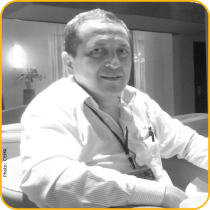 A true defender of local and regional governments has passed away

It is with immense sadness that CEMR and PLATFORMA have learnt of the passing away of their former colleague Néstor Vega Jiménez.

After a career at UCLG, Néstor spent three years at PLATFORMA (2012-2015), contributing to the success and development of the coalition. Always curious and a frontrunner, he is at the origin of PLATFORMA’s Twitter account. Fervent of new technologies, he later created the Municipal eLibrary, a platform “helping knowledge sharing between local and regional government practitioners around the world”.

“Néstor was appreciated by all of us in European local and regional circles for his tireless commitment to defending and strengthening local government in Europe and in the world,” said CEMR Secretary General Frédéric Vallier. CEMR and PLATFORMA staff express their deepest sympathy to his family and friends.