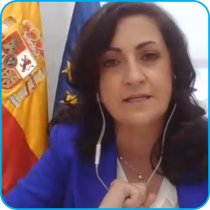 The European Union must take bolder action to promote women’s equal participation in politics, particularly at the local and the regional levels: improved data collection, funding of local gender equality initiatives and the countering of online harassment could all contribute to making progress.

That’s the message from Thursday’s (15 October) online session co-organised by CEMR and the Committee of the Regions, “The path to gender parity in politics”, as part of the European Week of Regions and Cities (EWRC). Over 60 participants, including mayors, regional leaders, EU officials and young elected politicians, joined the event to share their experiences and insights.

Emil Broberg, Councillor of Östergötland Region (Sweden) and CEMR spokesperson for gender equality, presented the latest figures on women’s representation at the local and regional level and urged the collection of more systematic collection of official data. “Without data we just fumble in the dark”, he said.

The Swedish politician emphasised the slowness of Europe’s progress on this issue and the need to take bolder action. “As we have seen with the newly formed government in Belgium, which has 10 men and 10 women members, parity is possible!” Broberg said. “But more robust action is required now to avoid regressions and to reach gender balance in politics by 2030.”

Committee of the Regions calls for gender-balanced decision-making

The session coincided with the recent adoption of the Committee of the Region’s position on promoting gender equality in the EU. CEMR’s input is reflected in particular on two important points.

Firstly, the European Commission should encourage national government to organise and support initiatives to empower women in local and regional elections. This is needed to counteract the effects of discrimination and other obstacles, such as stereotypes and social norms undervaluing female leadership. Secondly, policymakers must address violence against female elected politicians and other women in public life, including intimidation and harassment online.

Concepción Andreu Rodríguez, rapporteur for the Committee of the Regions’ opinion and President of the Regional Government of La Rioja (Spain), emphasised the benefits of gender-balanced leadership and the need for all public policymakers and civil society to become co-responsible for achieving gender equality. “We need all levels of administration to bring women of all ages into decision-making bodies”, she said. Without further action, it is estimated that it will take around a century for women to achieve parity politically and economically.

The EU strategy for gender equality must still be amended and adopted by the European Parliament. The Council of the EU is expected to adopt its position on promoting gender equality in December. Many questions on how the strategy will be implemented remain open: notably the delicate question of which EU programmes will fund it.

CEMR has been making progress towards gender equality within the organisation itself, notably in its governing bodies. The new Presidency which took office in January 2020 is made up of 10 men and 10 women, while 45.6% of the members of our Policy Committee are women. We are currently also planning a survey on the gender balance of CEMR member associations’ boards to be realised in the first half of 2021.