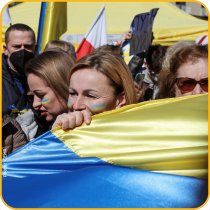 The Council of European Municipalities and Regions (CEMR) has continuously expressed its full and unconditional support to the Ukrainian people and their local and regional elected representatives since the beginning of the Russian-led war in Ukraine.

CEMR is horrified by the scenes of desolation and the atrocities that were witnessed following the liberation of the Kyiv region by the Ukrainian army and expresses its deepest condolences to the families of the victims.

CEMR strongly condemns what could amount to war crimes committed by the Russian Federation, notably in the town of Bucha, North-East of Kyiv, where more than 410 Ukrainian civilians were killed. These abuses are part of a wider context of human rights violations committed by the Russian Federation army, including rape, summary executions, and unlawful use of violence against Ukrainian citizens. According to the Office of the UN High Commissioner for Human Rights, 1,417 civilians, including 121 children, have been officially killed in Ukraine – figures that are probably much higher in reality, according to the Office.

“The massacre of peaceful civilians, rape of women, and brutal murders in Bucha, Irpin, and in many cities in Ukraine, are continually denied by the Russian military. I fled the war and I live in Poland now, I lost everything my house, my career, my dreams. It is hard to even imagine such horrific things happening in my own city where I used to organise events and training to promote green cities, gender equality, and strengthen young women’s rights.
With my colleagues, we continue to collect humanitarian aid and we count on the international community’s strong support.”

CEMR calls for an international investigation into the alleged war crimes committed in Ukraine in order to bring those responsible to justice and hold them accountable. Further sanctions must be taken as soon as possible.

CEMR reiterates its call on the Russian Federation to withdraw from the entire sovereign territory of Ukraine, including the Donbass region and Crimea.