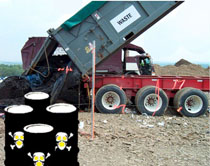 Waste shipment : CEMR and Parliament as one !

The Council of European Municipalities and Regions (CEMR) welcomes the European Parliament vote on waste shipment (19 November 2003).
CEMR believes the vote sent a strong message that shipments of waste are exclusively justified when they can provide an environmental benefit.
'By adopting a range of amendments on issues such as sham recovery or environmental benefits, the Parliament has spoken in favour of the strengthening of the control powers given to the competent authorities, says CEMR secretary general Jeremy Smith. The European Parliament has adopted CEMR's views that local authorities must be in a legal position to take appropriate actions in the field of waste shipment".
The vote means, among other things, that local authorities can object to the movement of hazardous waste if the exporting state country disposes of the technical capacity expertise and of the treatment facilities for treatment at homewithin its boundaries.
On 27 October and 17 November 2003, CEMR issued a position papers on the issue of waste shipment, in which it suggested several amendments aimed at reducing the possibility of sham recovery operations, at guaranteeing sufficient environmental benefit of recovery operations and at ensuring greater clarity in the legislation