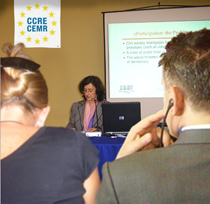 80 participants from some 20 countries met at the Council of European Municipalities and Regions' offices in Brussels for a seminar on new media and local democracy, on 21 September 2006. The seminar was co-organised by CEMR and its ELANET network (European Local Authorities' telematic Network). Its aim was mainly to highlight the role of information technology (ICT) as a means to help local governments get closer to their citizens.

The first part of the seminar focused on the broad concept of eparticipation (citizen's involvement in local life via the Internet) including the current state of play at local and regional levels and the EU's stance on the issue.

The bulk of the meeting was devoted to examples of best practice from all over Europe. Norfolk County Council's multimedia campaign aimed at young people and entitled 'It's not about politics, it's about you!" was introduced. Bologna presented its on-line civic network, Iperbole, while other cases came from Germany, France, Sweden, The Netherlands and Belgium.

Participants to the seminar agreed that the recipe for success for any initiative includes various ingredients such as establishing clear objectives, topics and target groups; working with existing networks whenever possible; focus on the quality and the content of the project; establishing proper feedback mechanisms and making sure it is genuinely about eparticipation rather than being propaganda.

Delegates were unanimous in their belief that ICT can help overcome the democratic deficit. Information technology can entice citizens being more active in local life while bringing politicians closer to their citizens.

Various speakers also stated that though there are examples of innovative and forward-looking eparticipation practices in Europe, there is a real discrepancy between a minority of municipalities having set up effective eparticipation structures and the large majority of local and regional governments lagging behind.

So why this gap? A number of reasons were put forward such as the financial cost: while egovernment initiatives (online administration) can save money, eparticipation has no financial benefit. Also, it is often complex and difficult to implement (you need to adjust each initiative to different target groups and you need to provide feedback mechanisms that can be very time-consuming).
Most representatives of local governments stressed the need for municipalities to find reliable, inexpensive, easy to use instruments that can be adjusted to different local scenarios. They also need support structures and advice to help them identify the best use of ICT for local democracy.
The presentations

Note: The EISCO 2007 conference (European Information Society Conference) will take place in Hämeenlinna, Finland in April 2007. It is organised by the European network ELANET (CEMR) with the overall aim to promote and develop the utilisation of ICT in local and regional government.