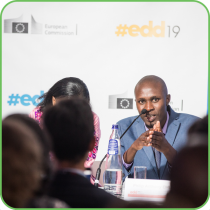 This article was initially published by the Covenant of Mayors in Sub-Saharan Africa.

From urban reforestation in Dakar (Senegal) to waste-to-energy conversion in Kasese (Uganda), our debate at #EDD19 (the European Development Days), introduced by Etienne Coyette from the European Commission’s DG DEVCO, was full of fascinating discussions on how African local governments are overcoming inequalities in their cities through climate action.

So, how do you fight inequalities with local climate action? As it turns out, there are many different paths you can take.

In Dakar, Senegal, as explained by Rokhaya Ndeye Sarr, one inclusive climate action project stands out: the city organised reforestation activities with schoolchildren from disadvantaged areas, thereby protecting the environment, raising awareness on climate change and fighting inequality at the same time.

In Kasese, Philip Anthony Emenyu explained the challenges and many great opportunities of climate action in Uganda. They are working on converting waste to energy, however, as he said, “one difficulty is providing the financial incentive to switch to renewable energy”.

Carin Jämtin, Director General of the Swedish International Development Cooperation Agency, shared her views from the donor’s perspective: “Equal access to electricity is key to poverty eradication. And without including local government, it will not be sustainable.”

One thing is clear: local climate action can be a powerful driver to overcome inequalities, but only if local government has fair access to financing. Cooperation with all spheres of governance, at home and abroad, is also essential. Talking about cooperation, Andrew Komba, from the President’s office of regional administration local government offices in Tanzania, invited us all to come to Tanzania to work together to further develop climate action at the local level!

Check out our twitter thread to discover the discussion as if you were there, and have a look at the photo album!

Keep the conversation going on social media with #EDD19, #ThinkTwice and #AfricanCities.