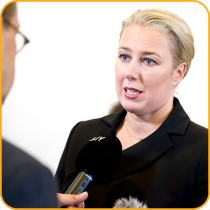 European Commission President-elect Ursula von der Leyen has finally unveiled today who will do what job in her administration. The International Cooperation and Development portfolio will be replaced by an International Partnerships function, held by Jutta Urpilainen, the Commissioner-designate from Finland.

“Once confirmed by the European Parliament, European local and regional governments and their representative associations look forward to work with the new Commissioner. We will especially focus on the leading role of the EU and its subnational governments for sustainable development in Europe and in partner countries, ensuring the right place for local and regional governments in the EU international policies as strategic partners, and decentralising the aid modalities” reacted Marlène Siméon, Director of PLATFORMA.

“Towns and regions are partners of international sustainable development, central players of territorial planning, and can contribute to national, EU and global policy-making, given their legal competences” she added.

She also welcomed the new name of the portfolio, “reflecting the new modalities of development cooperation of the XXIst century defended by PLATFORMA, based on partnership and equal foot”.

PLATFORMA takes the opportunity of the presentation of President von der Leyen’s new team to repeat its key positions In a position paper published in April 2019, PLATFORMA presented a series of recommendations to empower local and regional governments as key partners of EU development cooperation, in particular in the geographical programming of this policy  Towns and regions still face significant challenges to take part in EU development policy, but as a strategic partner of the EU, PLATFORMA will keep defending their competences and needs to the future Commission.

PLATFORMA and its members look forward to keeping the right path towards the implementation of the 2013 EU Communication “Empowering Local Authorities in partner countries for enhanced governance and more effective development outcomes” and the 2017 “New European Consensus on Development” for the localisation of Sustainable Development Goals (SDGs) in particular.

In a “facts and figures”, the Council of European Municipalities and Regions (CEMR), lead partner of PLATFORMA, noticed that 9 of the commissioners-designates are former local or regional leaders, including Ms Urpilainen who was a member of Kokkola city council in Western Finland.